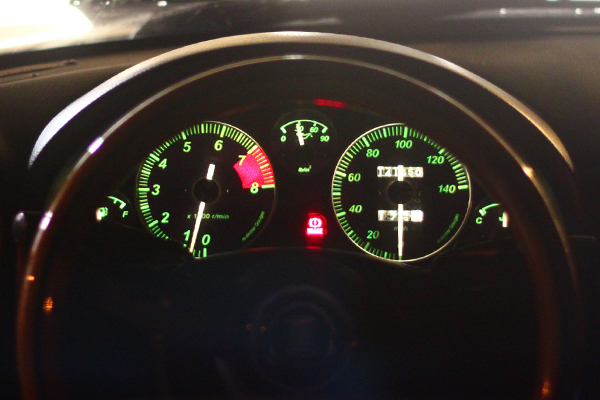 Since I’m a little late with my review, I’m not going to revisit the quality of the packaging. Just know all the praise you have read and come to expect from Revlimiter is all with good reason. Somehow, the quality and care that goes into the packaging just doesn’t come through in the written word. It’s better than you would expect.

The Install:
I was a little intimidated even after reading Revlimiter’s how to, even though I have had my gauge cluster apart a few times in the past and had even painted my needles in my previous Miata. I realized my fear was not that it was going to be too difficult, but the pressure I felt to NOT touch the faces. It turns out this is not that hard to avoid as long as you pay attention to what you are doing. Read Revlimiter’s how to, and just follow along. He has taken the time to lay out his instructions very well, sodo yourself a favor and do it his way. It works, and it works well.

6 O’Clock Mod:
If your needles are aiming at 6 o’clock, it is recommended to remove some of the plasitic that houses the lights at the bottom of the tach. I used Revlimiter’s method it it works perfectly. It was quick and effective. I fought the urge to use my trusty Dremel, but after completing the task, I realized all my gauge mechanisms were exposed, so the dust created by the Dremel would not have been a very wise move. Again, this worked out since I decided to follow Revlimiter’s instructions.

Quality:
Revlimiter has FAR exceeded my expectations here, and my expectations were high to begin with on this product. Let me start by saying, if you are happy with the OEM quality, then you will be blown away with these gauge faces. The most obvious difference and improvement over my OEM gauges is the matte finish. It appears to be a heavier matte texture, therefore having a darker and less reflective appearance. It reminds me of a super fine flocking. It gives a noticible contrast against my OEM gauge housing and really cleans it up. Just this alone makes it worth the swap in my opinion. The graphics / text is extremely crisp. It doesn’t appear to be “just printed”, but more like the high-end gauge faces that they are. Online pics just do not do them justice. Everytime I look down at them, “Hell yeah” comes to mind. Ha!

Please excuse the smudges and water spots on my plastic cover. Pics were taken during a very hectic time.

Backlighting:
This is an area I was fearful may be a weak point of any aftermarket gauge face. Not only is the lighting extremely even, but IT MATCHES PERFECTLY. How Revlimiter accomplished this is nothing short of amazing in my book. It must have been hours of test print after test print. No hot spots at all. This really does rival the OEM gauge faces in quality.

Final Impression:
Even being a perfectionist, I am extremely impressed with Revlimiter’s OEM+ Gauge Faces. He even put his logo on at my request. I was quite certain from what I know of the man, that these were going to be something I would want to display proudly. Revlimiter delivered as expected. If you want to clean up your interior, any of his gauge face offerings will definitely do the job. I spent a good month trying to decide on which design I wanted. I was like a kid in a candy store, and mom said I could only get one. I finally decided on the OEM+ to complete my NB interior conversion. That, paired up with my Revlimiter Gloss Black Vent Rings has really classed up my interior. They are without a doubt the 2 interior mods that have made the greatest impact.